sierraclub.org | Forgotten Crops of the Past

Dr. Jesus Garcia gets calls all the time from people who’ve found some long-forgotten plant growing in a patch of dirt somewhere in the hot dry desert around Tucson, Arizona. Over the years, he’s become something of a plant detective, having identified a white pomegranate growing in a grandmother’s backyard, an Asian jujube tree behind a long-closed Chinese grocery store, and quince trees in an abandoned mining town south of the city.

Garcia, a biologist and research associate at Tucson’s Arizona-Sonora Desert Museum, is not only uncovering layers of the region’s long agricultural history, but also reviving them at the Mission Garden in central Tucson. The roughly four-acre garden exists on the same land where European missionaries started planting orchards and other crops in the 17th century, when Tucson was still part of Mexico and New Spain. These missionaries had brought their trees from all across the world—the Far East, Mideast, and Europe.

But over the centuries, their gardens in Tucson dried up. Garcia grew up on a ranch in rural Mexico, where his parents raised cattle, cultivated crops, and tended a backyard orchard of fruit trees brought to the New World by Spanish missionaries. When he came to Tucson 15 years ago, he brought with him a mission to bring old-world trees back to life in the city too. “When we first started looking at the concept of heirloom trees that came with the Europeans, we started wondering, where are they now?” he says. Studying cuttings passed over fences and brought from backyards in Mexico, Garcia was excited to find several descendants of those original trees, growing in different parts of the Sonoran Desert.

He spent a lot of time poking around Tucson’s oldest neighborhood, the Old Barrio. “In a backyard, there would be this wonderful fig and then a pomegranate,” says Garcia. “That was one of the first encounters where we realized these trees are here; they are in the community. As I talked to people they’d say, ‘There is this pomegranate in my backyard and it’s never fruited or anything; come and look at it.’” He soon met an old woman tending “an abundance” of fruit trees in her yard—lima, figs, pomegranates, plums, peaches, and apricots. “I realized that when that lady died, the garden would die.”

Eventually, he collected enough cuttings to start a full orchard. The Mission Garden was born in 2012 at the base of a mountain where Indigenous peoples used to grind flour with bedrock mortars. Teams of volunteers and school groups gathered to pick up shovels and put in hours of hard work planting fruit trees and other crops. 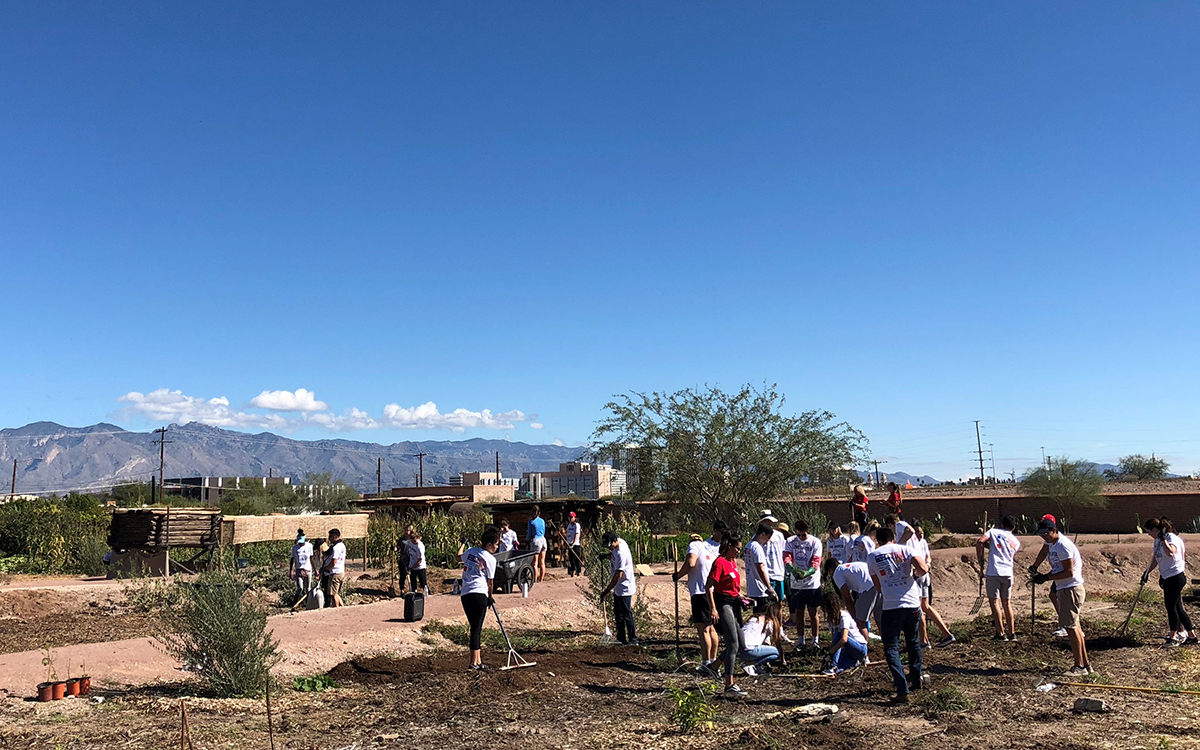 A stroll in the garden today is a walk through 4,000 years of agricultural history. Beyond colonial trees, the garden boasts native prickly pear cacti and Hohokam’s tepary beans, Mexican corn, and bitter melons that the Chinese brought to Arizona in the 1800s. Volunteers are presently planting spices in a new African American garden, and those tending Mission’s “Future Garden” will tackle questions of how to raise food in an age of increasing water scarcity, population pressures, and climate change.

“Bringing biodiversity to our local crops is essentially the main reason we do this,” says Garcia. “When you go to the supermarket and you look at any of the fruits and vegetables on the stands, those are supermodels. They have the looks, the perfect size, the perfect texture. Who knows what happened to any fruit or vegetable that is slightly ugly, or deformed, or too small, or too large?”

As we continue to consume only the supermodels, Garcia explains, we’re narrowing our crops’ genetic pool. “We are expanding our knowledge and diversifying our crops in case sometime in the future, pests or some devastating disease comes in that can wipe out the supermodel variety,” he says. “By creating diversity, we create resilience.”

And in Tucson—named a UNESCO City of Gastronomy for its centuries of continuous agricultural activity—that diversity is found in the past. “It comes from backyard orchards, from old-timers who continue to grow these fruits that have been adapted to this region,” says Garcia. “It not only creates genetic diversity, it also creates diversity of flavors.”

As Garcia leads me on a tour of Mission Garden one sunny Tucson afternoon, we sample a jujube, a small apple-like fruit from Asia. Garcia plucks a white pomegranate from a tree and cuts it open to reveal fleshy white seeds that date back to biblical times. We stop to admire a row of trees dripping with quinces, a yellow, pear-like fruit. Much of the bounty from the garden is donated to charities, given to volunteers, served at garden events, or sold to local restaurants to help fund operations. 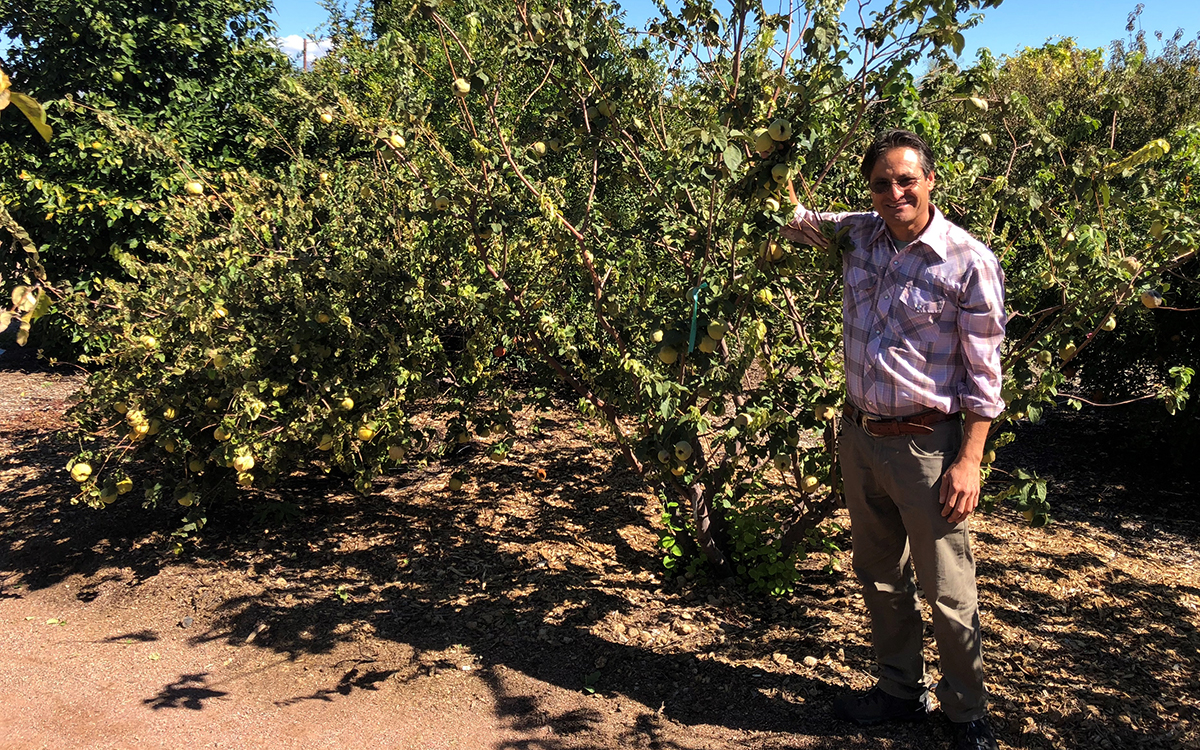 In addition to feeding people today and well into the future, the crops from the garden also nourish locals’ connection to ancestors in the Sonoran Desert. “When you eat one of these old traditional heirloom fruits, most people say, ‘Oh this reminds me of my grandmother.’ You are connecting to yourself and your identity,” says Garcia. “When you eat a quince that was brought by the Europeans 300 years ago, you are actually tasting history. You have this blend of old-world culture that still remains here and is part of us.”